The EMD GP8 comes in green or black from Tgauge.com. It’s built on the 35.5 mm motorized chassis with buckeye couplers. It has one long 7.5 mm coupler version which feels a bit fragile. The design is “solid” meaning that in this scale you may be afraid of breaking things but it’s not flimsy when you handle it. Still a bit worried about the long coupler.

NOTE: 8.5mm wide is about 1-2 mm wider then most other rolling stock so take that into account when you design a layout.

How prototypical is it? At 1:450 scale it’s really hard to get things truly prototypical and you have to exaggerate some details. Compromises like that is done in N and Z scale as well, it’s just more extreme in T Gauge. If you look at the TGauge.com ICE 3 train set it looks very prototypical but you don’t have cooling fans, hand rails, steps, panels etc to consider.

The first thing to point out is that it’s an EMD GP8, not a GP7 or 9 which is what most modelers are used to. GP8 is the designation given to a rebuilt GP7 or 9 and the result is that you don’t have a consistent look, you have low nose and high nose versions and a mix of components. The most visible detail on the TGauge EMD GP8 is the two what I assume are 48” fans, which is something that later models of GP9 had.

Long story short, it’s not that prototypical, the loco itself is a bit oversized, details are oversized but this is 1:450 scale and you have to be able to mass produce it. I would say you can pass it off as an EMD GP7, 8 or 9 if you are after “likeness”. To me it looks more as a late model EMD GP9 due to the two large fans.

We are getting skewed when we look at pictures like I have in this blog post. These are taken with a macro lens and it means you will see details and imperfections that is never really visible with your eyes.

How does it run? Very well would be the short answer. After I took it out the box I ran it for 10 min at a medium speed to “break it in”. I then began testing at low speed starting from stand still controlling it manually with the TGuage.com PWM Power box. It was surprisingly smooth and I was able to run it at low speed without any real issues. When I have tested the same thing with the 16m (35.5mm) motorized chassis I had it stall and being a bit jerky. I saw nothing of that really with the GP8. I think the slightly higher weight 2.48g gram vs the 16m chassis 2.08 gram contributes. You would think that 0.4 gram would make no difference but for T Gauge it does, and I would guess you have a lower point of gravity than the 16m kit bash chassis because of the width.

For me personally I am not bothered about it not being very prototypical, its a great generic EMD GP-X Diesel Loco for your North American layout that runs really well. The Cascade Loop is a great example of a layout using the EMD GP8.

I have been running circles (literally) with my Fine Track Set, and some ovals as well. Been testing how the 16m (35.5mm) chassis is running on the tracks and to understand the ins and outs of using the Fine Tracks. Previously I have only been running the DB ICE 3 set on the standard tracks with the raised bed and it worked perfectly.

With the Fine Tracks it becomes more tricky because they don’t have a perfect fit. It illustrated to me how the smallest miss alignment or “bump” can cause an issue on this scale. My test runs have not been under ideal conditions in any way, the tracks were not flat, they flex as the engine drives around etc. I had some derailments and stalling but it was always an issue with a gap in the track joint, or some misaligned track. If I carefully reconnected and adjusted the tracks, did some “polishing” (abrasive paper) and/or temporarily fix the track I could make the operation smooth.

It is impressive that despite the less than ideal set-up it worked fairly well, the magnetic wheels is a great “feature” in this case. The bottom line is that I am confident it will work but I need to be very meticulous when I lay the track and respect the size of the scale.

I received two Fine Track sets from TGauge.com with 60 and 70 mm radius curves. They look really good with high detail and feels solid to work with despite the small size. There were a couple of broken of “tie ends” on the 70mm track. I am sure if I asked I would get a replacement but in my case it is not and issue. 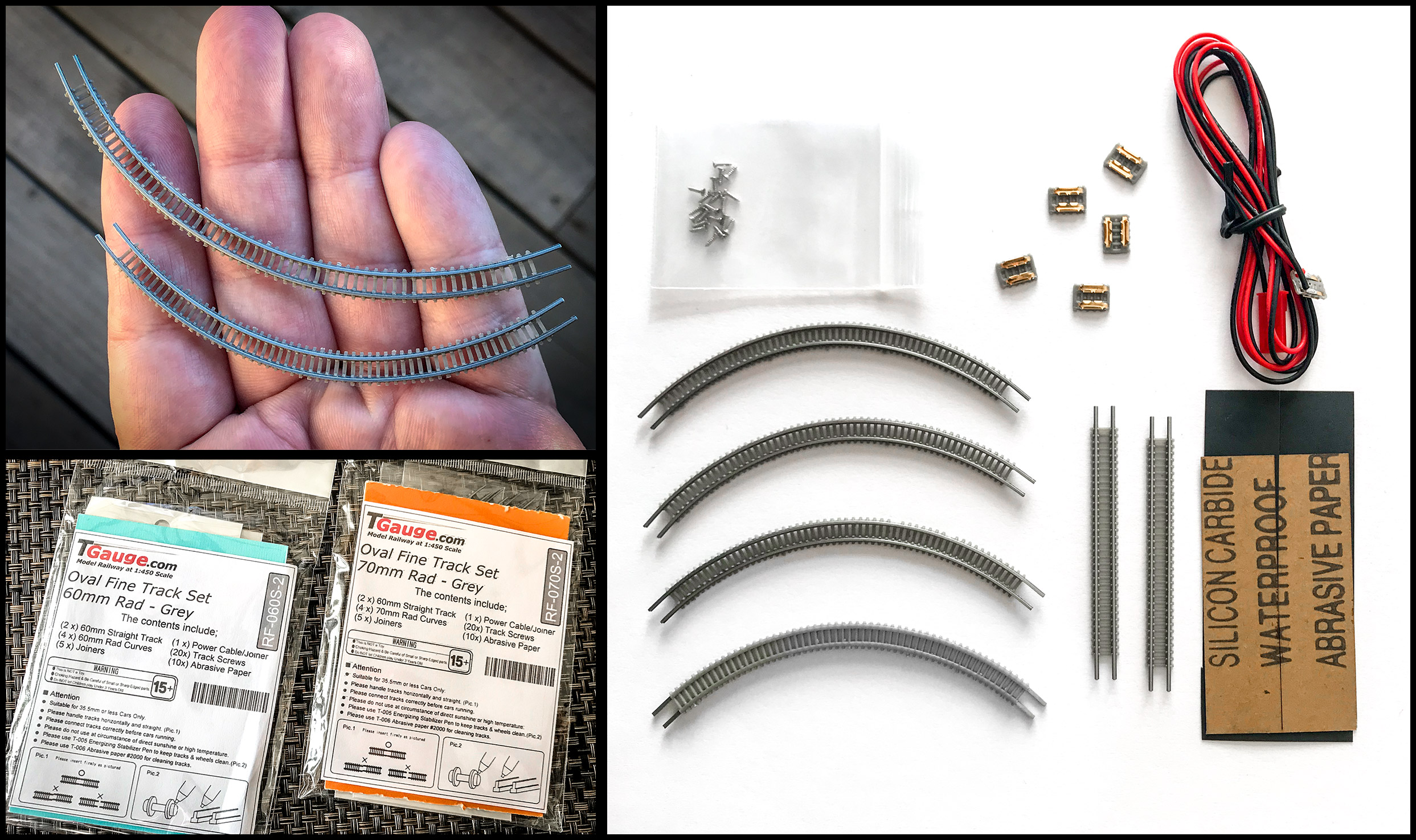 Connecting the tracks is easy, but you have to remember that it is 1:450 scale and it will be a bit “delicate”. If you connect and disconnect the tracks several times you will need to give the joiners a pinch (carefully) with a plier to tighten them a bit.

The recommended max length chassis is 38mm which means that the 16m motorized kit bash chassis (35.5mm) is really the only viable rolling stock. The smallest Engine (Loco) availble is 21m (≈ 46mm) so it will require you to do some “scratch” building using the 16m kit bash chassis. Don’t forget that the set does NOT include a Power control, you have to buy that separately.

In my case I am using the controller I got with the DB ICE starter kit (for now at least). 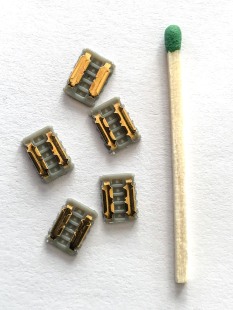 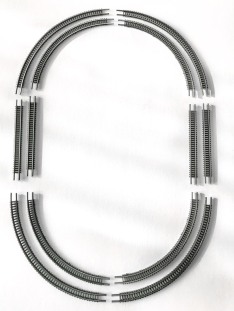 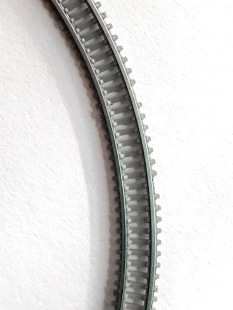 After playing around with the ICE 3 starter kit and looking around on-line to find some inspiration I think I want to build a “micro layout” as my first T Gauge project. I need to get some experience and test out concepts for how to build and model for T Gauge.

I found the “Fine Track Set” on the TGauge.com site. They have two different sets, one with 60 and one with 70mm radius curves and you can choose brown or grey ties. What I really like with the fine tracks is that there is no raised trackbed which looks better to me.

The maximum chassis length you can run is 38mm on the 60mm radius curves. The chassis for ICE is about 54mm so I need to get some shorter chassis for my layout using the fine tracks.

I just began testing my first T Gauge kit from TGauge.com. I knew 1:450 scale would be tiny, but until you hold a train in your hand it is hard to imagine just how tiny it is. I am used to building Z-scale layouts but this will for sure be a challenge. I have several ideas for layouts and the size will allow me to build multiple layouts in a very small space or maybe some modular system.

I bought the Deutsche Bahn ICE 3 Train Set with 8 cars and 120mm radius curves. You can buy another version with 4 cars that is a little less money. With the starter set you get everything you need, track, controller, switchback sensors etc.